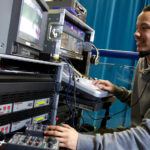 Writing scripts for broadcast television and radio is a skill set that requires certain abilities that are not necessary for publication work. You have to be good at choosing stories quickly because broadcasts for television and radio happen much more quickly compared to publications like newspapers and magazines. The broadcasts scripts should also need a strong narrative lead so the listener understands the information. A broadcast script also needs to be formatted properly for various out cues.

News revolves around storytelling in an effective, informative, and understandable manner. Broadcast news and radio broadcast news is based around being informative to the public about important stories going on in the world around us. A story for broadcasting has to be able to be summable in a broadcast though and can’t certain types of stories that don’t have enough information or are not easily summable for a viewer of the listener. They should also be news stories that are important for the community to be aware of where the broadcast is being distributed to. So the audience has to be understood by the broadcast scriptwriter. You have to know who is listening and watching and what kind of stories they need or will be interested in.

Viewers and listeners engagement is critical to an effective broadcast script. You need to create a script that the broadcaster can relay to the people properly. The dialogue needs to explain the news story in a manner that makes sense. The broadcaster will likely play a big part in how engaged the lister or viewer is in the story, but the dialogue is also critical for the audience to understand the story.

Writing naturally flowing dialogue that every man can understand is also important for the broadcast script to make sense to your audience. You need to write about the facts, but keep the dialogue flowing in a normal way. You might also consider the natural flow of the broadcaster you are giving the scripts to as a reference for you to write a natural flowing dialogue for them. You can make a goal to always read your script aloud to see if it naturally flows as well.

Broadcast journalism for television is something that requires a certain skill for those who are writing the scripts. You need to select the right stories, create engagement, write naturally for speaking voices, and format appropriately for the broadcast to function properly. With the right amount of read-throughs on past transcripts, practice writing, and actual experience writing scripts, you should be able to function properly as a broadcasting writer.